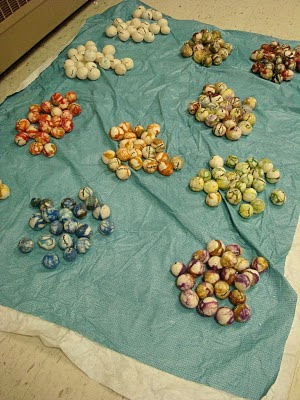 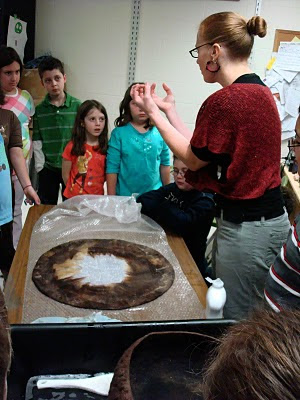 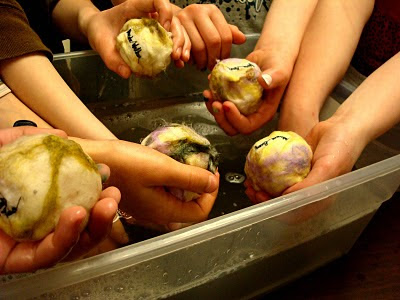 We are so very lucky to have a PTO that truly believes in and supports the arts!....The 4th and 5th graders are continuing their trip around the world and have landed in Mongolia, where they are learning about the art of felt making from Lisa Klakulak, an internationally known felt artist from Asheville, NC. Ms. K taught all grades the science behind making art out of wool, and taught them how to make felted eggs, that will be filled with small objects brought from home. Finished eggs will be placed in giant felted nests, embellished by the young artists, each representing the idea that we are all one small part of a larger community. I will post more about our project next week, as it nears completion. You can learn more about Lisa, and her fascinating work on her website, www.strongfelt.com.
Posted by Who we are..... at 4:44 PM 1 comment: 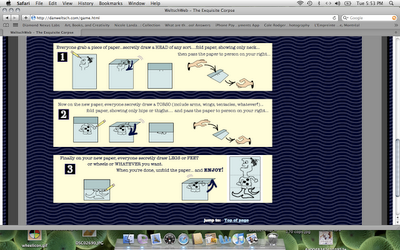 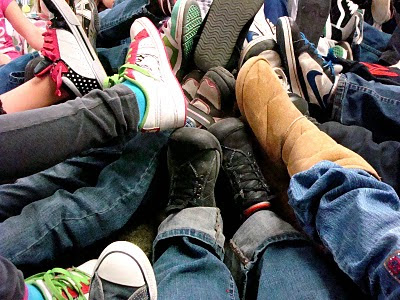 Today I spent part of the morning with Mr. White's 4th grade class....we had a great time playing an old drawing game begun by surrealist artists in the 1920's called "the exquisite corpse".....here are the directions below if you want to try it at home....make sure you don't let the people you are playing with peek at your paper! ( click on the screenshot to enlarge!)
Posted by Who we are..... at 2:54 PM 3 comments:

This is from the 'pen' of Alex Aldrich, head of the Vermont Arts Council....I know it is long, but it is a timely and IMPORTANT read, especially considering the economic times...thank you for taking the time to consider his thoughts...
"We are receiving reports from various arts supporters that legislators and newspapers have received letters that target the Vermont Arts Council and a few other small agencies for elimination.
I have read a few of these letters and their basic argument is that, as with household budgets when there is less money available, Government should cut programs (like the Arts Council) until it is operating within its means.
To me this sounds like a contestant on The Biggest Loser being told to eliminate the tablespoon of peanut-butter from his diet instead of addressing his 10-chili-cheese-dog-a-day habit because the peanut butter has, pound for pound, more calories.
Eliminating the peanut butter will, like cutting the Arts Council budget, result in two sure things: the problem won't go away, and worse, without it we will suffer from the lack of some crucial nutrients which our bodies and our society can ill-afford to be without.
The Government is not the same as a Household The basic flaw with the letters I have read is the assumption that Government functions like a household. Government is supposed to protect its interests and the citizenry (sometimes even from the citizenry itself!), negotiate with foreign countries on behalf of the people, and provide programs and services that are in the people's interest but for which there is no market incentive for investment (like schools and health-care, and teacher's and veteran's retirement programs, all of which are topics that are too big to discuss here!).
A head of household, however, tends to preserve and protect what is dear to him/her, even if it is at the expense of a neighbor or the community-at-large. Nowhere is this behavior more pronounced, its effects more devastatingly felt, than when people charged with acting in the public trust behave instead like individuals bent on preserving and protecting "what's theirs." This is essentially what happened in Washington and on Wall Street during the past five or six years during which regulations were either gutted or ignored. Speculators created high risk/high reward instruments that created fortunes for themselves overnight, and when everything went sour, turned to the Federal Government for a bail-out. So-called public servants protected their own assets at the expense of everyone else.
So here we sit in a recession/depression with private capital more or less dried up, unemployment at a 25-year high, and private enterprise at best, in a state of paralysis. It is very tempting to cut Government spending until we have once again reached the point where our revenue equals or exceeds our expenses; where our annual deficit disappears; where are accumulated national debt starts to decrease.
The problem is that if the Government does this, then unemployment will get much worse and inflation will skyrocket because there are fewer goods and services being produced. Depression in every possible meaning of the world will be the status quo on a scale not seen before... It seems counter-intuitive to individuals dealing with their own household budgets to say that the best possible way to improve things is for the Government to spend more, but Government is the only player right now who has access to capital.
Government must invest borrowed capital in order to invest in private enterprise to create jobs and restore consumer and market confidence. It is these jobs, these industries that receive this investment that will, eventually, and not without great anxiety, allow us to move towards a recovery.
Arts=Jobs; Arts = Community State Arts Agencies not only recognize and support vital cultural institutions and artist projects, we partner with a variety of private and public partners to showcase various attractions and festivals that cause huge numbers of visitors and entrepreneurs to come to our state. These visitors spend enormous sums in our shops, restaurants, and hotels. The entrepreneurs start businesses, employ people and contractors, and make positive demands on and contributions to our community's social fabric.
Arts agencies also serve as a catalyst that allows significant amounts of supplemental educational experiences to engage students in our schools, most of which is directly related to the schools' curriculum goals and all of which is directed towards specific performance goals for every student, not the least of which is developing skills for the 21st-century workforce that are highly prized--like collaborative decision-making, public speaking, and creative thinking.
The two most frequently cited reasons why a business chooses to locate in one community over another--all other factors like tax incentives and regulations being equal—are the quality of the schools and the quality of community life, both of which are highly dependent on a thriving arts sector.
Cutting Government’s small investment in the arts, far from improving our economic situation, will actually make if far worse. Not only will the cut place at risk 2000 jobs throughout the state, but the closing of perhaps dozens of our cultural institutions, and the drying up of arts education programs in our schools will make Vermont a significantly less attractive place for people to visit, to invest in new businesses, and to raise families.
So, please, don’t be fooled. Eat the peanut butter. It's good for you. The real threat is those chili-cheese-dogs."

Who we are.....
This is the official blog of the artists at Founders Memorial School in Essex, Vermont...check back often to see what we are learning about and creating!

sites to explore your creativity....

quote of the month...

" If you ask me what I came to do in this world, I, an artist, will answer you. I am here to live out loud"
Emile Zola

Have our posts delivered straight to your inbox!